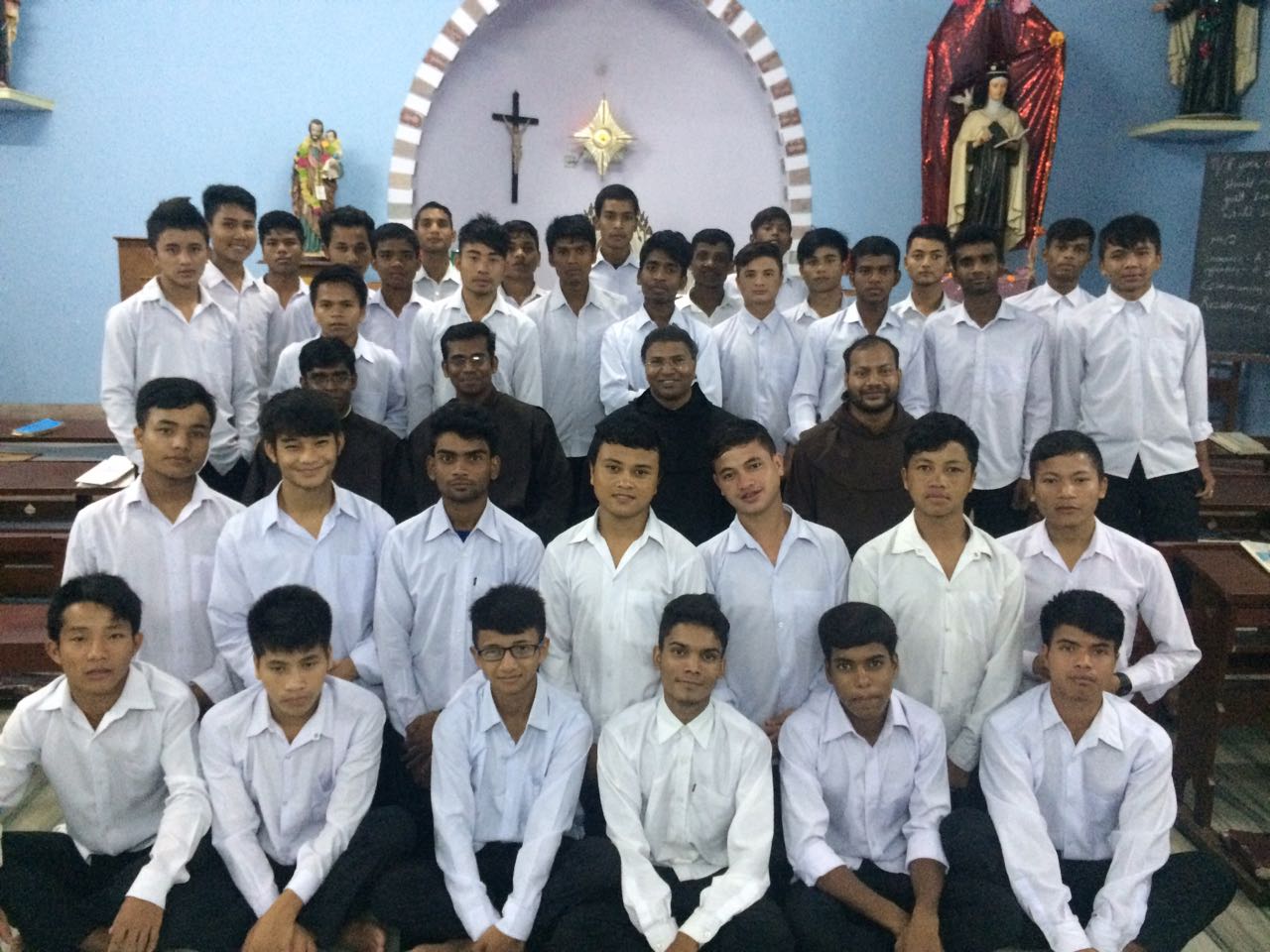 On 28th January 2002, Rev. Fr. Xavier Jayaraj OCD, the then Provincial, sent Fr. Joseph Livera to Bolpur the birth place of Tagore to explore the possibilities of opening a mission in the Diocese of Asansol. He spent a few months in the parish of Bolpur to learn Santali, the local language, and sent the report to Fr. Provincial about the urgent need of opening a mission with a Carmelite character. Since from the beginning Fr. Joseph Livera had established healthy relationship with the diocese, and the Bishop was kind enough to invite the Province to acquire some twenty bigas of land in Lakurdi, Burdhaman, “the land of paddies.” The present land where the monastery is situated has its own history. Before the arrival of the missionaries, the refugees from Bangladesh occupied this land, but due to a severe flood, it was deserted and they occupied the main land. Later the same land was used as a burial ground, which was discontinued when the diocese occupied the land and built the wall. When the Carmelite missionaries came to occupy the land it was simply a deserted land, and the Burdhaman Municipality and the nearby mills used it as a dumping ground for the garbage from the town and burned husks. The first thing the missionaries did after reaching Lakurdi was to bless the land and entrust it to the care of our Divine Mother. Like the community at Duruelo, the new community started in a bamboo hut with three Friars (Frs. Joseph Livera, Thaddeus and Br. Albert Joseph ) and seventeen candidates on 29th June 2003. The community was canonically erected on 20th February 2005. The community had to bear with various problems; the heavy winds which fly the ashes, thieves, poisonous snakes, flood, hot weather, winter nights etc. But their love for the Church and Carmel enabled them to endure these silently. Soon with the wise guidance of Rev. Fr. Bernardine M. Louis OCD, the Provincial, arrangements were made for the new building. Within a year, the building was completed and dedicated to the Mother of Carmel with the name FlosCarmeli. This historical event was inaugurated by the newly elected Provincial Very Rev. Fr. Wilfred Miranda OCD in the presence of Rev. Fr. Bernardine M. Louis OCD, the former Provincial, and blessed by His Exellency Rt. Rev. Cyprian Monis, the Bishop of Asansol, on 28th July 2005. On Sept. 2nd 2005, Rev. Fr. Thaddeus was appointed as the new superior and the director of Aspirants. During his tenure, the community underwent various kinds of difficulties. The sudden death of Bro. Ashok Xalxo was one of the most painful incidents, which remains in the heart of all the members. When Fr. Thadeus left for Italy for his higher studies, the community was in need of an efficient leader to animate it. God sent Fr. Augustine Stanly to take up this challenging task. The first words that he ever uttered after reaching Burdhaman was “Praise the Lord”, the echoes of which still remains. After making a serious assessment of the situation, Fr. Stanly learned that the root cause of many problems was due to the lack of proper contact with the local people and authority, the result was that the whole locality became friends within few months from the cowboy to the District Magistrate. Meanwhile the Missionary sisters of Mother Teresa occupied the old hut which the Friars used and started their missionary works with the cooperation of the Fathers and Brothers. Within few months, the burial land became the land of life with fruit trees, flowers and cultivation, thanks to Fr. Stanly and Fr. Paul who carried trees and saplings all the way from Kerala. FlosCarmeli Ashram is the Aspirancy House of the Regional Vicariate. Now we have 24 aspirants under formation.

On August 6th 2006, the day of the Transfiguration of our Lord Jesus Christ, the community ventured into a novel apostolate of starting a tuition centre for the poor children of the locality. And the locality responded in a positive and creative way with approximately 150 children. This venture is in view of transfiguring the hearts and lives of the people of the locality through their children. This tuition centre is named after the great mystic poet of India – KabiguruRobindranathShikan Kendra. In view of the integral development of the locality, a foundation stone was laid for the tuition centre by Mr. NikhilananthSar, the Honourable Member of Parlament., Burdhman on January 1st 2007. But the dream never came true.